Deeper Roots: What Tu B’Shvat Taught Me as a Child and as an Adult

I learned to sing this song when I was 6 years old:

Even though it’s hard to imagine new growth and greenery in New England at Tu B’shvat (the 15th day of the Hebrew month of Sh’vat or January 26th, 2013), around the world children in Jewish communities will learn to sing songs like this, honoring the natural cycles of the land and its anticipated rebirth in the spring. In the Middle East, the holiday marks the awaited beginning of a new growing season, and many celebrate the holiday by eating foods found in Israel and planting trees as a way to symbolically bind themselves to the land. Here, in the US, we also usher in the holiday by affirming our relationship to our earth and committing ourselves to protecting its natural systems, even as we utilize its resources for sustenance. In large part, this comes with an overall understanding of what is available to us and how we manage our food choices. As our options for food growing, purchase, and preparation grow increasingly complex, it can be equally difficult to navigate the choices we have as people. Some, too, may have wondered standing in the local market: “How did this product get here? What impact did the process have on the land and other life while getting from the soil into my cart?” END_OF_DOCUMENT_TOKEN_TO_BE_REPLACED

Sowing the Seeds of Sustainability

Early spring is a time to think about the coming agricultural cycle, growing season, birth and rejuvenation. This year, the conference will feature the theme of Justice within Sustainability.

We will educate and build community around issues of sustainability and activism within a multi-generational, pluralistic, and diverse setting. We will propel the Boston Jewish community to the forefront of the local sustainability movement as well as national conversations. The event is just in time to kick off the New England growing season with awareness and intention.

We are currently forming a planning team for the second BJFC, to be held in early March 2013.  Early spring is a time to think about the coming agricultural cycle, growing season, birth and rejuvenation. Paramount throughout the day will be the theme of Justice within Sustainability. How do my food choices affect others? What are the climate implications for how I eat? What can I do to create a more just food system? What resources exist in my community to guide my decision making?

Planning team members will organize and oversee all aspects of the BJFC. This is a wonderful volunteer opportunity to build community and shape priorities. Our first planning team meeting will be on Thursday Nov. 15th at 8:00pm. If you’re interested in joining the planning team, please email Leora@beantownjewishgardens.org or call 617-877-2036.

Planning team time commitments will vary throughout the year, depending on the area of responsibility. All planning team members are asked to help drive one particular piece of the conference, working with a small group of others from the larger team. Expect to work as a conference ambassador or on various tasks for about an hour a week, with planning team meetings/ phone calls once a month. Team members will provide leadership at the BJFC itself.

Posted on September 9, 2012 by Leora Mallach

WHERE:
Powisset Farm
The Trustees of the Reservations
37 Powisset St, Dover, MA

We will be celebrating rain or shine!

Kids activities, art projects, dried herb bundles and infusing oils, live music, fresh produce for purchase….. In this era of unpredictable weather systems, this year also offers us the opportunity to gather and consider our place and impact within Creation, and the blessing of rain in its proper time.

We would love to know in advance that you plan on coming: http://bit.ly/SukkotFestivalRSVP

There are many opportunities to get involved: volunteer on site, lead activities, build community. For more information contact leora@beantownjewishgardens.org

“He who has not seen the rejoicing at Simchat Beit Hashoeva
(the Water-Drawing Celebration) has never seen rejoicing in his life”
(Talmud, Mishnah Tractate Sukkah 51a) 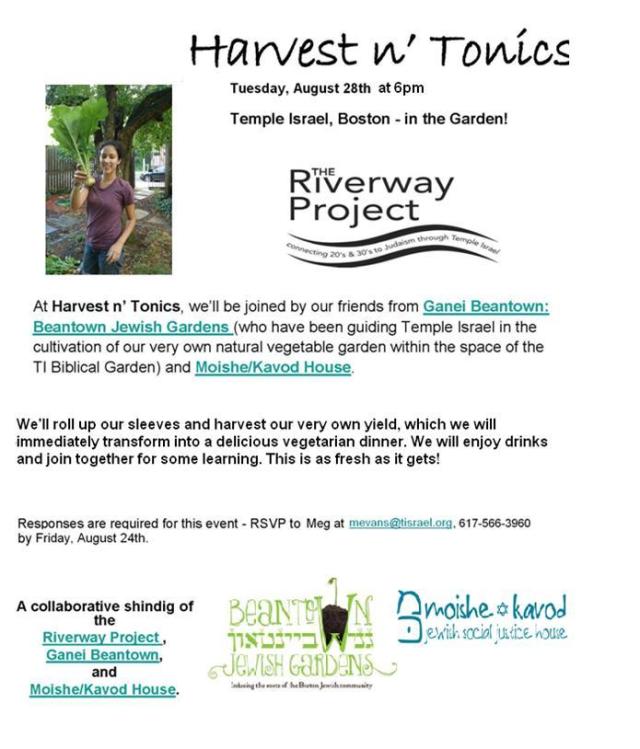 This originally appeared in the Jewish Journal.
By Amy Sessler Powell 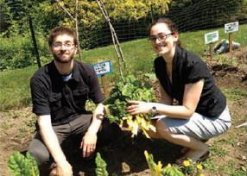 Synagogue gardens on the North Shore are sprouting up much like the fresh green chard and tall tomato plants within their boundaries. During this growing season, three local synagogues, Temple Sinai in Marblehead, Temple Shalom in Salem and Temple B’nai Abraham in Beverly, have joined both a national and a Jewish trend of going back to the earth. “Our tradition is rooted in agriculture, and everything from there is rooted in our ethical laws,” said Rabbi Aaron Fine of Temple Sinai.

In a prior position at a Jewish camp in Western Mass., Fine learned that many Jewish values can be taught through a community garden. He also has access to expertise through his brother, Rabbi Jacob Fine, who is director of the Jewish Farm School. Like Fine, other rabbis and synagogue leaders are finding that gardening offers a multitude of ways for synagogues to engage with Judaism. From connecting to the harvest holidays to Jewish values of tikkum olam to community engagement, the garden is ripe with opportunity.

Leora Mallach, co-founder and director of Ganei Beantown (Beantown Jewish Gardens), a resource for synagogues, said, “One of the beautiful things about farming is the ability to transcend institution walls and denominations.”

Ganei Beantown hosted the first Boston area Jewish Food Conference in April featuring speakers on a variety of subjects. Rabbi Aaron Fine and Tom Cheatham, a member of Temple Shalom, spoke during a workshop called “Voices from the Garden: The Oy’s and Vey’s of Educational Gardening.” The workshop discussed the synagogue garden as a setting for Judaic or community engagement, intergenerational learning, social action and fun.

Each North Shore synagogue has focused its garden projects a bit differently to meet the unique needs of their communities, but all acknowledge that the projects present all sorts of possibilities.

At Temple B’nai Abraham, the sixth grade families have taken the lead, along with the synagogue’s Social Action Committee. As these students prepare for their upcoming b’nai mitzvah, they are taking weekly summer shifts in the garden to weed, water, plant and harvest.

“They are getting to that age where they will become more responsible as Jewish adults to do mitzvot, and this is a good way to learn how to give to the poor,” said Rabbi Alison Adler, who has developed a curriculum based on Torah text to go along with the garden.

The produce harvested in B’nai Abraham’s garden goes to Beverly Bootstraps. Educators from Bootstraps have worked with the synagogue to enhance the learning experience.

Cheatham said that Temple Shalom’s placement of Gan Ruth on the front lawn of the synagogue generated some lively debate, but ultimately raised the garden’s visibility in the neighborhood. The garden is a partnership with Little Beginnings, a neighborhood preschool that rents space in the temple.

Each Friday, Suzie Cheatham, temple administrator and Tom’s wife, works with four children in a rotation, and they bring the produce home to their families. Another bag or two of produce goes to Lifebridge, a shelter in Salem, and some of it is used to prepare salad for the synagogue’s Kiddush lunch.

“Our preschool families are not wealthy, and this is a way to connect with them. We are contributing healthy food as a way to express the value of leaving something for the poor, and we have a built-in constituency,” said Suzie Cheatham.

Temple Shalom has worked with many community resources to get the garden started. They used a $300 Innovation Grant from the Jewish Federation of the North Shore, as well as expertise from Ganei Beantown and the Highland Coalition, a grass roots group in Lynn that works with the Ford School community garden. They also partnered with Temple B’nai Abraham on some garden-based educational programming.

As the gardens grow, the first harvests are being donated. Temple B’nai Abraham donated 15 bags of lettuce to Bootstraps. Temple Sinai donated fresh lettuce and chard to the Jewish Food Pantry, and Little Beginnings families are enjoying fresh spinach, lettuce and peas.

As the summer goes on, these gardens will yield potatoes, tomatoes, berries, greens and, ultimately, pumpkins, squash, gourds and more.

Temple Sinai has arranged a series of programs tied to Jewish festivals and Rabbi Fine hopes to decorate the sukkah with bounty from their Menorah shaped garden. As they expand their garden, he is also building a gaga pit to create a pleasant outdoor space on Temple Sinai’s beautiful grounds.

Jordan Tarbox, 13, of Marblehead, is working with Rabbi Fine as part of his mitzvah project for his upcoming bar mitzvah.

“We come out here on Shabbat with families and we see how the garden is growing, we play a post-shul gaga game. More than anything, the garden is a good community builder for people of all ages,” Fine said. 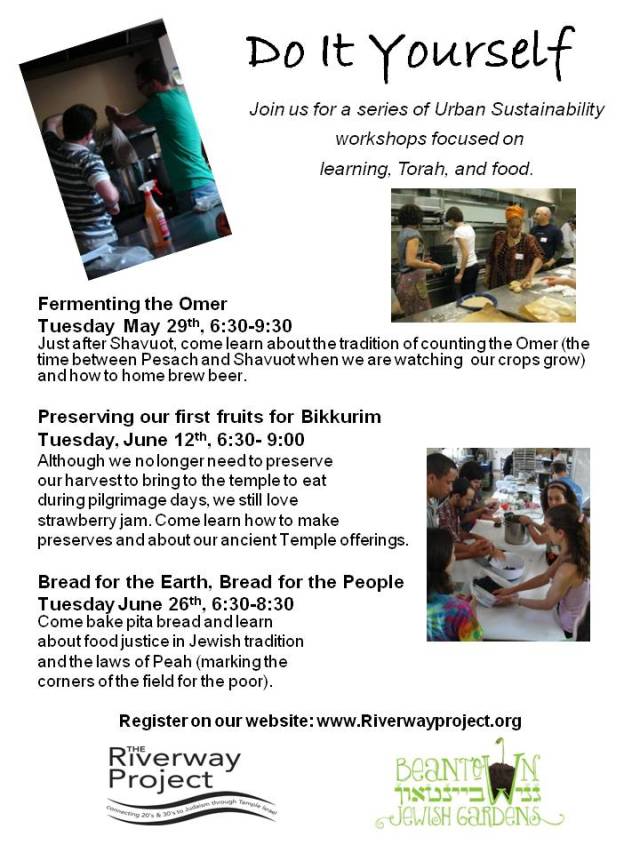